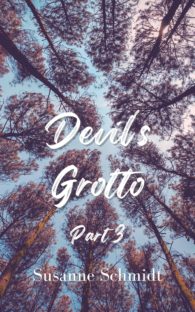 This is the third and final part of Devil's Grotto. If you'd like to start at the beginning:

“Should we go on?”, asked Anja after a while.

“Yeah, I guess...Think it's dangerous for her to go back alone?”

We continued our struggle through the mud and were finally rewarded when the forest started to change. A steep hill, covered in fallen leaves and dry pine-needles rose to our left, while to our right the forest floor fell softly into what looked like swampy terrain. Juicy green moss covered the ground.

The playful sounds of gurgling and splashing water, which came from further ahead, told us that the creek did indeed rejoin the path. Much wider than it had been at the bridge, it flowed smoother and slower. Moss and ferns grew on both banks. Laughing at our unexpected success, we gained new strength and walked faster. The path curved to the right, away from the hill, following the course of the creek.

We more or less crawled up the steep slope, covering every scrap of ourselves in forest floor, until we had reached the rocky top.

“Wow, it really is a cave!”, I gaped at the grotto’s dark entrance.

“So much for Dorian’s stories never holding any truth.”

“Don’t see why we shouldn’t just draw the crosses, since we’re already here.”
“Not really keen on going inside, though,” I muttered while eying the mouth of the cave.

Thoughts of dragons and monsters haunted my mind. And spiders. I could ignore them when they crossed my path somewhere in the forest, provided I could run away from them, but I panicked at the thought of being stuck in a cave while they crawled down from the root-covered ceilings. Anja laughed at my reluctance.

“Lelia Wannabe Hero, you made me walk all this way, and I’m going to need to see what’s inside the evil cave! We’re going in or I’m telling everyone in our class that you’re a little chickenshit on Monday.”

I started laughing out loud at her dead-serious tone and the venomous threat. Still giggling, we slid back down the hill. We didn’t have any water bottles, but decided that drawing the crosses with mud from the stream would still satisfy the requirement since it contained lots of water. Soon we found a little clearing where the creek was even wider, because it fell from a tiny waterfall into a deep pool.

“This is so cool! We should come here more often,” I said, all fears forgotten at the prospect of getting to play around in the mud. “It could be like our secret hideout.”
Anja arched an eyebrow at my announcement.

“It's a bit far away to do this all the time. And a bit complicated to get to. Maja’s right, we’ll be in so much trouble with our moms.”

She gestured at her dirty clothes, and realizing she was right, the initial excitement seeped out of me, while my mind scrambled for new solutions. Perhaps we could bring our bathing suits, or rain pants, but the prospect of trudging through the woods in plastic pants seemed even less appealing than never coming back at all. I let my shoulders droop.

“Then let’s at least come back here after we've done the cross thing?”

Anja nodded with a tight smile on her face, knowing I had been trying to convince my parents to let me have a sand pit I could flood in our backyard for years, even though I was really getting too old for it.
Anja and I scooped up two handfuls of mud from the ground and walked back to the foot of the hill, where we began the steep ascent once more. The soft forest floor swallowed the sounds of our steps, but our gasping breaths echoed around us.

“If the bad man really existed, he’d have found us by now,” said Anja in a dry tone.

She entered the cave, and after a few moments came back to the cave mouth to give me the all clear.

“No spiders as far as I can tell. But the druggies know about this place, too.”

The cave itself was unexciting. No self-respecting dragon would ever choose to live in this little hole in the earth. The ceiling hung low and there were only three small interconnected chambers. Various spray paintings covered the gray rock face of the walls, cigarette buds and empty bottles covered the floor. The stuffy air smelled of wet earth and rotting leaves, and something which I chose not to identify.

“Let's draw the crosses and get out of here,” said Anja. I nodded my approval.

We quickly found ourselves a clear spot on one of the walls, at least it seemed to be clear as far as we could tell in the twilight.

“Next time let’s bring a flashlight.”

“Ugh, yeah I don’t think so.” Anja chuckled and shook her head. “I’ve had enough of this place.”

We both laughed which chased away my lingering unease as we hastily drew the crosses and climbed out as fast as we could.

“Someone probably had too much to drink and didn't make it out in time.”

We spent the rest of the afternoon playing on the banks of the creek, building little mud castles and figures with clay we found near the waterfall. When the sun's rays transformed the water of the stream into liquid gold, we realized it was time to leave.

Half-eager, half-reluctant, we returned to the path and retraced our steps. The return trip didn't feel nearly as long as coming here had. Our bikes remained locked to the tree where we had left them; only Maja's was gone.

“Think she's finished watching Baywatch by now?”, I asked, still a little sad that Maja missed out on the mud castle extravaganza by the creek. But really, it was her own fault.

Slowly we reached the outskirts of the forest, where the trees grew further apart and a few rays of sunlight managed to touch the ground. Once again we arrived at the creek and had to balance our way across the wooden planks. When we were safely on the other side, we gazed at each other, grins widening as we took in the full impact of our appearance. Both of us were drenched in sweat, pine-needles stuck out of Anja's braid and my own hair resembled a bird's nest. Our faces were encrusted in mud and our clothes looked like we had crawled through a swamp. Our moms would probably have heart attacks once they saw us, but for now it felt good. Like an achievement. The successful end of an exciting quest.

Still laughing, I glanced back at the forest, but my smile faded quickly when something caught my eye. I blinked at the creek.

“Nothing... Um - What's that pink thing floating in the water over there?”

I pointed at it. It was only a few meters away. Anja shrugged and mounted her bike.

“Stop it, Lelia, you’re creeping me out. Enough adventures for today, okay? Let’s just go home. Please? I want the forest out of my hair.”

Swallowing my dread, I nodded and tore my eyes away, mounting my bike as well. We pedaled home in silence, basking in the amused looks our mud-spattered faces drew from old couples out on their evening stroll.

My mom nearly fainted when she opened the door. Narrowing her eyes at the state of my clothes, she told me to walk around the house into the back yard instead, where she used the garden hose to wash off the worst of the mud before allowing me back inside. The guinea pigs watched with wide eyes from the safety of their enclosure, nibbling on grass and bathing in the warmth of the late afternoon sun. I complained about my mosquito bites in the hope of being comforted, but my mother took no pity.

“Serves you right, after carelessly running around in the woods. Personally, I’m more worried about ticks.”

I squealed as the water from the hose suddenly turned much colder and Mom sprayed me once more for good measure before walking over to turn it off. The early evening went by while I cleaned my bike and rinsed my clothes and shoes. Finally I took a real shower and washed my hair.

When I came back outside, my parents were already sitting on the terrace, having dinner. I was in the middle of recounting my adventures when the phone rang. Our smiles faded.

My mom sighed and walked into the house while I shifted uneasily in my seat. My dad returned to his dinner, but I had lost my appetite. I leaned back in my chair, trying to hear what my mom was saying on the phone. Her tone sounded animated, and hectic, then turned soothing before she hung up with a deep frown. Our eyes met and she pursed her lips, like she was about to lecture me.

“Who was it?”, anxious though as far as I knew I shouldn’t be in any trouble.

“Yeah. She wanted to watch Baywatch.”

“I don't know... Around three thirty maybe? Her bike was gone, too, when we picked up ours... Maybe around half past five?”

My voice rose higher when a note of panic entered it. Mom's hand tightened around the plastic receiver. She nodded and went back inside, already dialing a number.

She looked back at me and tried for a reassuring smile.

“It's probably nothing, Lelia.”

Thanks for reading, and if you enjoyed this story and haven't subscribed to my newsletter, do so here for another free short story.

Or, if you'd like to support my work, leave a tip on my Kofi page.