Read as epub
Read as mobi 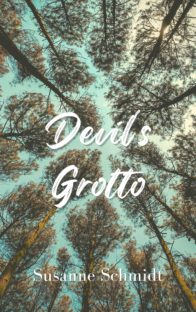 Three young girls search for a haunted cave in the woods, but is the legend of the evil spirit living there really just an old story meant to keep the kids from playing in the forest?

We found the cave in the woods toward the end of third grade, on a Saturday, with the summer holidays just two weeks away.

The morning sun beamed golden rays through my window and my guinea pigs, proudly named after the comic book heroes Asterix and Obelix, were busy chewing last night’s hay in their corner of my bedroom. After the rainfall of the last few days, a balmy breeze entered through the open windows and stirred the wind chimes that hung from the wooden ceiling. I was lying on my sofa, stomach full from a late lunch. When the doorbell rang, I was still contemplating whether I should play with the neighbors' kids, who were a few years younger, or just stay in the garden, enjoy the sun and read a book.

“Coming!”, I yelled back, and happily abandoned all thoughts of a quiet weekend when I saw Maja waiting in the hallway downstairs.

My best friend since before I could remember, Maja was a year older than me, with light blond hair and a gorgeous smile. Far more confident than me, far more charming, even though she hid a vicious streak.

In kindergarten, she developed an obsession with princesses, but she told me princesses had to be blond, so I couldn’t be one. She had meant it as an insult, but it suited me just fine, since I was more interested in the sword she kept in her room, made from cardboard and aluminum foil.

She also convinced me that spiders were the most disgusting creatures on the planet and we practiced our panicked screams whenever we saw one in her basement or our shed. Of course, by the time we found the cave, she had gotten over her fear of spiders just fine, while I was settled with crippling arachnophobia. But despite these breaches of trust, Maja could do no wrong. I worshipped her.

“Wanna come out to play?”, she asked and smiled, knowing I would never say no to her.

I shouted a hasty goodbye to my parents and grabbed my shoes.

We left my house, and spent an hour riding our bikes through the quiet streets of our village, trying to think of a masterplan of what to do with the day. No aim, no goals, just us, and the long weekend ahead.

“I could go for some sweets at the bakery,” I said dreamily. I never had any money to afford them, and wasn’t supposed to have sweets anyway, according to my mother, a fact of which Maja was well aware.

In truth, I knew very well. Maja's TV only had 5 channels and we would end up watching Baywatch again, like every weekend, and I very much wanted to avoid that.

“What else is there?”, she asked.
“Should we ask Anja if she wants to play with us?”
Anja was my other best friend. Maja's smile faded a little around the edges.

“Um...okay, I guess,” she drawled. “But let's go to the bakery first. I don't have enough money for three.”

Greedy for candy, I didn’t object.

With our cravings for gummy bears and chocolate satisfied, we soon found ourselves outside the high metal gate of Anja's house. A slender girl with long braided hair and huge trusting eyes, she walked towards us smiling, her bike at her side.

“Where to?”, she asked, carefully closing the gate behind her, so their landlord's rottweilers wouldn't decide to come out and play, too.

“How about the Ship?”, I ventured.

The Ship, a large wooden jungle gym which resembled a sailboat, was the largest playground in the area. Since neither of my friends came up with a better idea, we mounted our bikes, crossed Main Street and passed several streets with nothing but boring houses. All tidy, white or gray with their red rooftops, their windows open to let in the warm air.

The Ship was located in a valley by the river, where green meadows and tall pine trees replaced the houses. By the time we reached the playground, we had been riding in the sun long enough to be drenched in sweat. The playground was bursting with toddlers and their mothers, even though the metal railings felt hot enough to fry eggs.

“I don't want to get my clothes dirty,” declared Maja and took a seat on a swing.

Anja and I, much less concerned about our appearances, played around on the slides for a while, before we climbed on board and pretended to steer the huge metal wheel at the Ship’s rear. When the smaller kids complained about us hogging it, we descended into the belly below, and after some deliberation we climbed the masts, declaring ourselves daring pirate princesses at sea. But even that game could not cure our restlessness. Made worse perhaps by prim Maja who watched us with arched eyebrows and the sort of amused boredom we affected toward much younger kids.

Shifting in her seat as we sat down next to her, sweating and panting, Maja lifted her face into the sky, where the clouds floated by above the tree tops.

“Why does nothing ever happen here?”, I groaned.

We stared off into the distance. I started to daydream of adventure, of quests exciting enough to involve swords and magic, when Maja suddenly jumped from the swing, excited.

“Have you guys ever heard of the Devil’s Grotto?”

Maja lowered her voice as if she feared being overheard.

“My brother told me about it.”
Anja laughed.

“What story?”, I asked, holding my breath.

“It’s a cave in the woods behind the old mill. You’ve probably never heard of it, because it’s hidden in the forest. We’d have to follow the stream from the mill to find it.”

“Way more exciting than this place,” I said, glaring at the overcrowded Ship. Besides, caves meant treasures. And possibly dragons.

“Lelia, it's just another of Dorian's stupid stories. And there’s weird people in those woods.” Anja shuddered.

“It's kind of a long way from here, though” drawled Maja, baiting me.

“Come on! We can finally have an adventure!”
I was practically jumping up and down by now.

“Okay, I guess,” said Maja, smiling. “But it was your idea.”
Anja sighed, knowing she had lost this round.

“We'll end up bored in the woods with no cave in sight. Just like when he told us about the mountain lion, or the dead body in the creek.”

“But we had fun, trying to find it. And you still don’t have a better explanation for how all that foam got there, do you?” I asked her.

At Anja’s tired shrug, I started walking to our bikes.

Continue on to Part 2.